Matching your donation to humanitarian relief for refugees and migrants

September 15, 2015
My name is Rita Masoud and I am a refugee. I was born in war-torn Kabul, Afghanistan. When I was seven, my family and I fled to Europe with our belongings in a single suitcase, hoping for a safer and better future. Our journey involved many dark train and bus rides, as well as hunger, thirst, cold and fear. Fortunately, we received asylum in The Netherlands, where I grew up in a safe environment and was able to find my way in life. Today, I work for Google in California. I was lucky. But as the refugee and migrant crisis has grown, many people like my family are desperate for help. Last week, Google announced a €1 million (~$1.1 million) donation to organizations who are providing front-line humanitarian relief to refugees and migrants around the world. Today, we're inviting you to join us. To double the impact of your contribution, we’ll match the first €5 million (~$5.5 million) in donations globally, until together we raise €10 million (~$11 million) for relief efforts. Your donation will be distributed to four nonprofits providing aid to refugees and migrants: Doctors Without Borders, International Rescue Committee, Save the Children and UN High Commissioner for Refugees. These nonprofits are helping deliver essential assistance—including shelter, food and water, and medical care—and looking after the security and rights of people in need. Visit google.com/refugeerelief to make your donation. Thank you for giving. 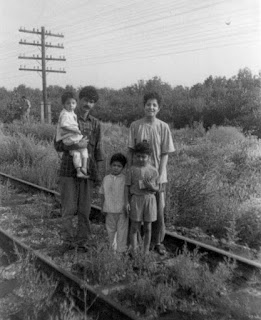 En route from Afghanistan, with my family and some belongings. You can read more about my journey on my blog.
Posted by Rita Masoud, Product Marketing Manager, Google.org

September 15, 2015
Today for the first time, we’re releasing Street View imagery of Kenya—including the Samburu National Reserve, Lewa Wildlife Conservancy and the David Sheldrick Wildlife Trust—in partnership with Save the Elephants and with the support of the Samburu County Government. We'll let Save the Elephants' David Daballen take it from here. -Ed. It’s a wild life at the Save the Elephants research camp in Samburu, in the heart of northern Kenya’s wilderness. For the last 15 years at Save the Elephants, I’ve spent my days among the elephants, working alongside my fellow Samburu people to study and protect them. Research shows that 100,000 elephants across Africa were killed for their ivory between 2010-2012, but thanks to our work in the Samburu National Reserve their numbers are now slowly increasing. Today, a visit to Samburu is a chance not only to see these magnificent creatures in their natural habitat, but also discover a uniquely beautiful landscape where people’s lives are interwoven with the landscape’s wildlife. It’s my honour to invite you on a journey to my homeland with Street View in Google Maps. Every time I drive into the Reserve, I can see the trust on the elephants’ faces and feel a warm welcome. When I’m out and about, I never know which of my fellow citizens I’ll bump into next. It could be some of the 600+ elephants I can recognize—like the Hardwood family—frolicking together, a group of Samburu warriors walking along the Ewaso Nyiro River, a pride of lions enjoying a bit of shade, or a leopard crossing the path. While you make your journey through Street View, you may be surprised what awaits. 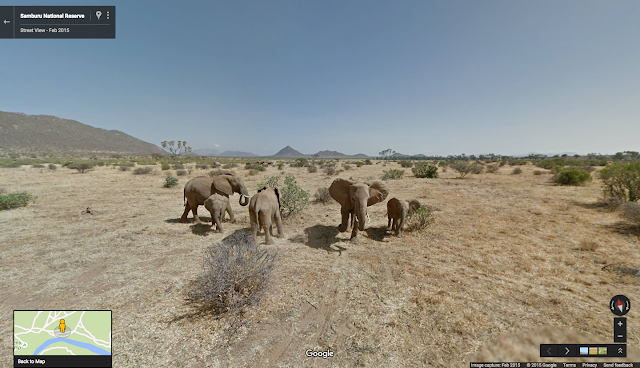 Hardwood family of elephants, Samburu National Reserve, Kenya
South of Samburu, up into the hills of Kenya, the Lewa Wildlife Conservancy awaits exploration. In this greener landscape, you can cross the open savannah, where animals like zebras and rhinoceroses live protected from poachers and hunters. Every day, the Lewa radio command center plots the movements of elephants (and other GPS-collared wildlife) onto Google Earth to help rangers determine where elephants are and when they might be in danger. If an elephant’s GPS collar sends an alert to indicate the elephant has stopped moving, a team of rangers and tracking dogs will investigate. Save the Elephants was one of the first organizations to use this technology, having collared 266 elephants across Africa since 1998. 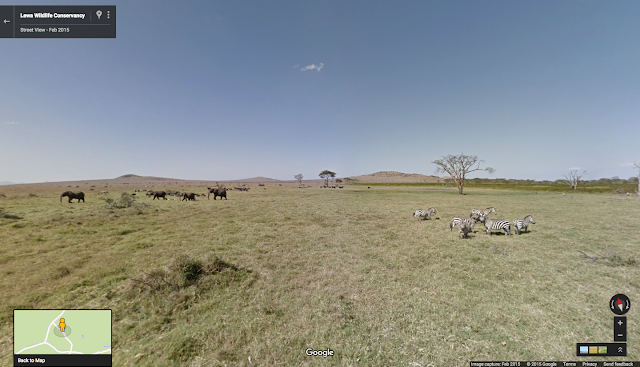 Elephants and zebras graze in the open plains of the Lewa Wildlife Conservancy
Visiting the David Sheldrick Wildlife Trust, you can see the devastating effect of poaching and other causes of elephant deaths in Kenya. Founded in 1977, the Trust provides lifesaving assistance to wild animals in need, including orphaned elephants and rhinos. At their Elephant Orphanage in Nairobi, elephant caretakers stand in for an elephant’s lost family, providing 24/7 care and specially formulated milk. As the orphans grow, they are gradually reintegrated back into the wild, where they are protected by the charity’s Anti-Poaching and Aerial Surveillance Teams. To date, the David Sheldrick Wildlife Trust has hand-raised more than 180 orphaned infant elephants, including little Sokotei, who I helped to rescue in Samburu after his mother died of natural causes when he was six months old. He’s just one elephant amid thousands that have been lost across the continent, but when you're up against a challenge of this scale, every elephant counts. 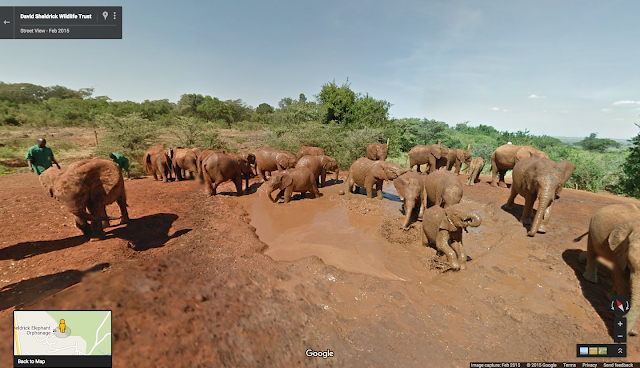 Orphaned elephants play in the mud at the David Sheldrick Wildlife Trust in Nairobi, Kenya
I hope this glimpse into life in Samburu has inspired you to learn more about elephants’ plight and how you can help. Samburu is my home and is full of life. To ensure it remains that way, please consider supporting the research of Save the Elephants, making a donation to the anti-poaching efforts of Lewa Wildlife Conservancy, or fostering an orphaned elephant at the David Sheldrick Wildlife Trust. After exploring in Street View, come and see us here in Kenya in person—we’d love to have you! Posted by David Daballen, Head of Field Operations at Save the Elephants 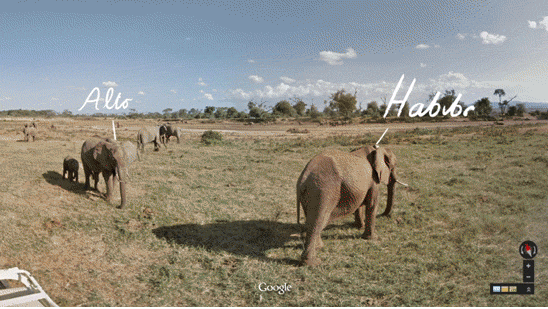